Joseph A. Peiffer has focused his practice on business bankruptcy for more than 30 years, and established Ag & Business Legal Strategies (formerly Peiffer Law Office, P.C.) in 2016.

As someone who grew up on an Iowa family farm in Delaware County, Iowa, Joe Peiffer has a keen interest in agricultural law. He graduated from Iowa State University as the top graduate in his class studying Dairy Science, as well as Public Service and Administration. Peiffer received his law degree, with Distinction, from the University of Iowa.

During the farm crisis of the 1980s, Joe served as the law clerk for the busiest bankruptcy judge in the country. After that clerkship, he began representing family farmers to assist them with their financial problems. In addition to assisting with financial problems, Joe has: handled negotiations to split up farm businesses; sold farming operations on a going concern basis; represented farmers before the ASCS dealing with issues involving conversion of wetlands; litigated involving the sale of sows infected with pseudorabies; and appealed adverse rulings by ASCS regarding qualification for payment limitations by family farm units.

Since 1994, Joe Peiffer has been certified in Business Bankruptcy by the American Board of Certification. He has been active in legislation, spearheading laws that make it easier and cheaper to place bankruptcy case records in Iowa’s county records. In addition, he served as legislative chairperson for the Commercial and Bankruptcy Law Section of the Iowa State Bar Association.

Joe is licensed in both Iowa and Illinois. He welcomes new clients and enjoys helping businesses regain their financial footing.

Because of his own history in agriculture, Joseph Peiffer has a thorough understanding of agriculture. He can relate to your complex situations with knowledge and empathy. Once he hears about your unique operation, he’ll suggest practical solutions—solutions he’d offer his own family. 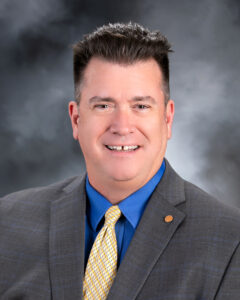 Vincent R. Ledlow is a seasoned lawyer with vast experience that he has brought to Ag & Business Legal Strategies. Vincent joined ABLS in December 2020.

Vincent received his undergrad and J.D. degrees from the University of Alabama. After graduation from law school, Vincent was an associate with the Birmingham, Alabama, firm of Cabaniss, Johnston, Gardner, Dumas & O’Neal, and he subsequently followed that firm’s bankruptcy and later Walston, Stabler, Wells, Anderson & Baines. At both firms, Vincent’s practice consisted of representing large financial institutions in bankruptcy proceedings and in commercial disputes in state and federal courts throughout Alabama.

In 1992, Vincent became judicial law clerk to the Hon. R. Clifford Fulford of the United States Bankruptcy Court for the Northern District of Alabama. Upon Judge Fulford’s passing in 1994, Vincent returned to private practice where he represented individual and business entity debtors in cases under Chapters 7, 11, and 13 of the Bankruptcy Code. In addition, Vincent’s private practice included an extensive civil trial practice in the courts of his then home state.

Later, Vincent was an Assistant Attorney General for the State of Alabama in 2001.  Vincent left the Alabama Department of Insurance in 2007 after attending the University of Connecticut School of Law and completing the requirements for his LL.M. in Insurance at that institution.

In June, 2017, Vincent returned to the Midwest when he accepted a position as Assistant Commissioner for Enforcement and Bureau Chief for the Securities & Regulated Industries Bureau at the Iowa Insurance Division. Before joining ABLS, Vincent briefly worked in the Bankruptcy department at Bradshaw, Fowler, Procter, and Fairgrave in Des Moines.

Vincent lives in the greater Des Moines metro area with his wife and enjoys watching University of Alabama sports (“Roll Tide!”), nurturing his lawn, and enjoying as much spicy food as he can get his hands on. 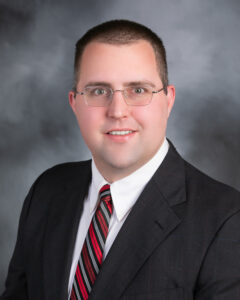 Austin J. Peiffer joined Ag & Business Legal Strategies in 2020, after spending a year clerking for the Honorable A. Benjamin Goldgar, Chief Judge of the United States Bankruptcy Court for the Northern District of Illinois in Chicago. He earned his law degree from the Washington University School of Law in St. Louis, Missouri, with a certificate in Business & Corporate Law. While in law school he worked with the school’s Low-Income Taxpayer Clinic and served as a judicial extern with the Honorable Charles E. Rendlen III (ret.) with the United States Bankruptcy Court for the Eastern District of Missouri. He is licensed in Iowa and Missouri.

As Joe Peiffer’s son, Austin grew up immersed in bankruptcy and life in Eastern Iowa. However, his path to joining Ag & Business Legal Strategies and setting down roots in Cedar Rapids took some long detours. After his undergraduate studies at the University of Iowa, where he earned degrees in mathematics and music while spending four years as a member of the Hawkeye Marching Band, Austin pursued a career as a professional trombonist, earning music degrees from the University of Utah and the University of Missouri–Kansas City and taking orchestra and military band auditions around the country. However, when he met his future wife he decided to change gears and pursue a career as a lawyer.

Austin enjoys reading, listening to music, cooking, playing trombone, and spending time with his wife and their twin children.

Keith Starr has been active in business and agriculture all of his life.  Having grown up near Keokuk, Keith went on to complete a degree in Agribusiness Economics from Southern Illinois University.  Along the way he also completed the Graduate School of Banking in Madison, Wisconsin.    For 30 years of intensive banking, Keith helped farmers and business people achieve their dreams through well-structured and innovative loan programs.   He is familiar with IADA, FSA, and SBA programs.

Keith and his wife Joanne live in Charles City where Joanne remains active in the medical field.  Their three children, having graduated from Iowa schools, now teach, program computers, and work in business development.

When not working Keith can be found in his second term as a City Council representative for Charles City.    He is also active on various boards in the community and still finds time to fish and work with Boy Scout activities.

Jaida was born and raised in Cedar Rapids. She has studied Business Management and fosters a great love for business structure. It is her smiling face that you will see when you enter our office.

When not in the office, Jaida loves spending time with her husband, two amazing children, and 3 dogs. Her hobbies include cooking, baking, and traveling whenever she gets a chance.

Ryan was never sure what he wanted to be when he grew up, so after graduating high school, he went on a meandering journey across the state of Iowa in search of himself. Four colleges and three degrees later, he returned to his hometown of Cedar Rapids, where he now works as a legal assistant at Ag & Business Legal Strategies.

Ryan does a little bit of everything at the firm—drafting and organizing court documents, preparing exhibits, handling reports, filing and mailing things, proofreading, and the like. When not working, Ryan enjoys programming, writing, playing video games, pretending to be an artist, playing the piano, chatting with friends, and maybe spending a little too much time on the internet.

Abby is about to receive her degree in paralegal studies after taking a few years off from college to decide what it was exactly that she wanted to do for a career. She recently moved back from Minneapolis where she was working as a legal assistant at a bankruptcy firm and is currently readjusting to life in her hometown of Cedar Rapids. When she is not on the clock, you can find Abby watching something on Netflix, playing piano, spending time with friends, writing, or trying to learn how to longboard. 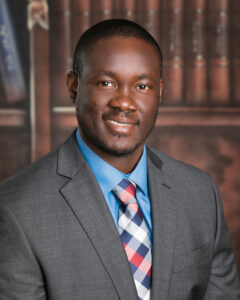 Gordon with his friendly demeanor has joined Ag & Business Legal Strategies as a paralegal. Having obtained his law bachelor’s in England, a desire to move to the US and be closer to family has brought him to ABLS.

He assists our seasoned and well-experienced attorneys by managing and maintaining case files, drafting documents and correspondence, and working with clients on their matters. He likes cooking, reading, traveling and bicycle riding.

Mike handles much of what you don’t see when you come into the office. Accounts receivable, accounts payable, building maintenance, and supplies requisition are only some of the things he is in charge of.

When he is not at work, Mike can often be found cooking off-the-wall things, riding bike, traveling, or spending way too much time on the internet.